This show was opened by Paint the Town Red. They’re from Tsartlip First Nation. It was awesome and I met the group and told them that I’ve been seeing them on APTN and it was so great to finally meet them and see them. 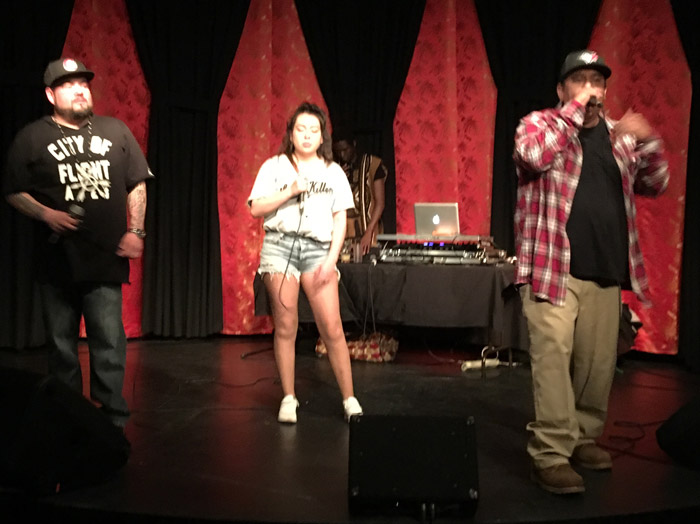 We have local hip hop and they’re expressing Indigenous lived experiences! Props to them for opening for The Sorority.

The Sorority Pledge Tour was incredible and I had the honour to meet them backstage and give them a warm West Coast thank you.

What really resonated with me, besides their A1 conscious hip hop, was that one of the cypher’s, @itsmepagliacci, took time to appreciate local community organizing and the work we all do inter-generationally.

And here’s what Keysha had to say:

Keysha: We played in Victoria last night and after the show, people came up and they gave us flowers. That was a very emotional moment. We’ve never been to Victoria, none of us have even performed solo, so to have that type of love. Like, people went to the store, bought flowers, wrote a card — that thought means that we have people who really listen to us, that we inspire people, and that we touch people so much they want to buy us flowers.

I was also happy to run into a member of Antidote, Letitia, at the show, who is a long time facilitator and community organizer.

Judy Woo is a first generation Chinese-Canadian, born and raised on Lkwungen Territory Vancouver Island. She is a multimedia artist and art and performance curator, working in painting, collage, upcycled garbage art, graffiti. She has been holding space for racialized people in the arts and culture landscape for two decades.